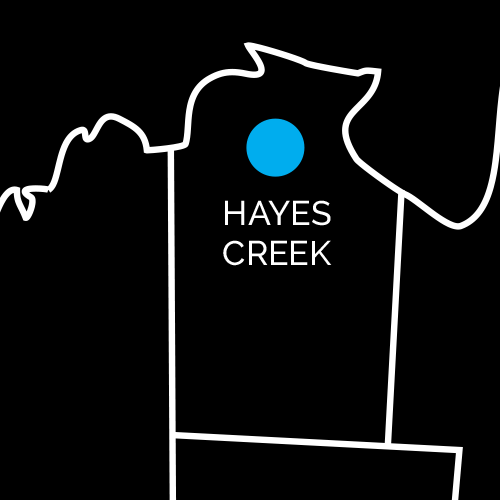 The Hayes Creek zinc-gold-silver project is located in a favourable mining jurisdiction in the Pine Creek region of Northern Territory, 170km by road south of Darwin. It comprises 14 wholly-owned mineral leases including the Iron Blow and Mt Bonnie VMS deposits which were acquired in 2014 from Newmarket Gold NT Holdings Pty Ltd, a subsidiary of Canadian-listed Kirkland Lake Gold Ltd. A Pre-Feasibility Study (PFS or Study) was completed over the Project in late June 2017 and announced to the market on 12 July 2017.   The PFS confirms the Project to be a high value, relatively low risk and technically strong development opportunity for the Company.   The Study forecasts the Project to generate an NPV10% of $133 million, based on net smelter revenue from the sale of zinc and precious metals concentrates of $628 million over a 6.5 year mine life. With a low $58 million of initial capital expenditure, the Project is forecast to have a 73% internal rate of return and pay-back period of just 15 months.

The proposed development at Hayes Creek is based on a steady state 450,000tpa processing rate with ore sourced from initial open pit mining operations at Mt Bonnie and subsequent underground mining operations at Iron Blow. In total, approximately 3 million tonnes of ore are forecast to be processed over a 6.5 year mine life of which 98% is classified as Indicated Mineral Resources and only 2% as Inferred.

The PFS assumes construction of a purpose built processing plant with crushing, grinding, and flotation circuits to generate two valuable product streams, a zinc concentrate and a precious metals concentrate. Annual production in concentrates are forecast to be 18,200t zinc, 14,700 oz gold, and 1.4Moz silver, or 39,100t of zinc equivalent.  The concentrates will be trucked to the Port of Darwin and then shipped to international markets for sale and smelting and refining.  The development strategy at Hayes Creek includes the use of existing infrastructure including rail, road, high voltage power lines and water, designed to boost economics and reduce project risk.  Refer ASX Announcement 12 July 2017 for full details of the PFS.

In July 2018, PNX finalised an agreement with Newmarket NT Holdings (a subsidiary of Kirkland Lake Gold) to acquire four mineral leases at Fountain Head was completed, thereby securing the preferred site for the Project’s proposed processing plant and tailings facility.

During the 2018 field season there was a renewed focus on regional exploration and as such the DFS progression was limited to studies relating to the Notice of Intent (NOI), Environmental Impact Statement (EIS) and ongoing metallurgical flotation test work.

Exploration drilling at the Fountain Head project in 2018 has intersected gold mineralisation from the south-eastern corner of the existing historic open-pits to the Banner prospect which amounts to an approximate 1.6km strike, and down to a vertical depth of ~250m. Almost the entire strike extent remains open, the scale of the mineralised envelope at the Fountain Head project is significant.

An updated mineral resource estimate is expected to be completed by end of June incorporating this new drilling information and new structural knowledge.

A desktop conceptual mining study is ongoing to determine the relative values of the gold mineralisation at Fountain Head versus using the existing historic open pits as the in-pit tails location, or a combination of both for the Hayes Creek project. Processing options are being assessed that will include third party treatment scenarios. This study will assist with the development strategy for the project.

With increased investor interest in the project, in particular from new sophisticated investors (link to successfully completed Rights Issue ASX release) the DFS has re-commenced. The longest lead-time items for the Hayes Creek project still relate to environmental and regulatory approvals with the submission of the EIS proposed for mid-2019. These approvals and finalisation of the DFS are expected to take until at least the first quarter of 2020, subject to any unplanned delays.

The DFS will provide increased confidence in all aspects of the Project as well as investigate opportunities to improve overall project economics thereby increasing the prospect of favourable development finance terms and structure.

Drilling Results – Refer News for all ASX Announcements containing results of drilling programs at Iron Blow and Mt Bonnie since acquisition in 2014.